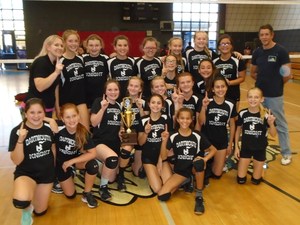 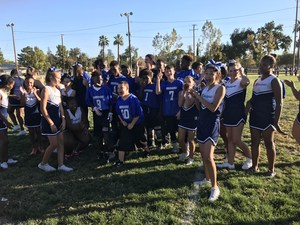 Another season of middle school sports has come and gone and what a season it was! Students from Acacia, Dartmouth, Diamond Valley, San Jacinto’s Monte Vista, San Jacinto’s North Mountain, and Rancho Viejo competed against each other in flag football and girls’ volleyball.

Rancho Viejo went undefeated in flag football this season. They beat Monte Vista 14-0 in the championship game. Jonathon Workman said, “Some of these boys have been to the championship game twice, prior to this year, so it was great to see them follow Coach Marshall’s leadership and get the win on their third try.” Mr. Workman continued to say that the boys on the flag football team have continued to be model students on campus and in the classroom, and he is incredibly proud of their continued hard work to improve each year.

Dartmouth’s Girls’ Volleyball team also went undefeated this season. They beat Rancho Viejo in a real nail-biter of a championship game. Jim Wiesen, Athletic Director for Diamond Valley Middle School, said, “The girls’ championship game was unbelievable!” The game was so close it went to the final serve. In the end, Dartmouth won the game 15-13.

Wiesen said bringing sports to the middle school level has added a new layer of school spirit. Both students and staff get excited for their home games. School’s have posters reminding students of upcoming games and staff host lunchtime pep rallies to get the student body even more excited.

Mr. Wiesen continued to say that the fall sports were a great way to start off the year for middle school sports. School’s athletic staff will be holding Boys’ and Girls’ Basketball and Boys’ Soccer tryouts the first two weeks of December. Students must maintain a 2.0 Grade Point Average and maintain a satisfactory citizenship/ behavior in the classroom. Wiesen said the League puts a big emphasis on the behavior aspect and won’t allow students to play until they improved their citizenship/behavior.

If your child is interested in playing sports during the winter season, please contact your school’s Athletic Advisor. Congratulations to Rancho Viejo’s flag football team and Dartmouth’s Girls’ Volleyball team for winning the fall championship games!