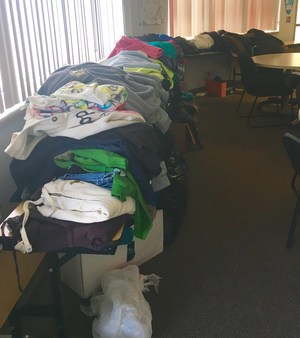 Stories depicting human kindness and compassion are hard to find these days. It seems that every time you turn on the news, you witness violence and negativity. With imagery like that, it’s hard not to feel like we are divided. However, two teachers at Rancho Viejo Middle School are focusing on things they can change to make a difference in the lives of students around them.

Aracely Worley, a Special Education teacher, noticed that some of the students walking around campus didn’t have jackets on despite the chilly weather. She talked to her colleague Terry Whitton, an English teacher on campus, and asked why that was. Whitton explained that some of the students didn’t have a jacket and therefore suffered during the winter months. Worley and Whitton began discussing a clothing drive to collect jackets for students in need. Whitton had created a drive once before and helped Worley write an email asking for staff donations, and staff rose to the occasion.

Worley wanted to spread the word of the drive past the walls of the Rancho Viejo campus, so she took to social media. She posted on a local Facebook Temecula group, Temecula Talk, that she was collecting jackets for students on her campus. A follower of the group that helps manage a local Hemet Facebook group, Hemet Valley Incidents, reached out to Worley and asked her to post on the Hemet group’s page. The post was shared and liked so many times it was picked up by NBC, which they posted on their website. Since the social media post and the NBC coverage, Worley and Whitton have received nearly 300 jackets.

Worley said she was overwhelmed by the amount of generosity she has witnesses. People throughout the community have been coming by to drop of jackets, mittens, and gloves. Vista Murrieta High School’s Associated Student Body (ASB) held a jacket drive specifically for the students at Rancho Viejo and gave them the jackets they had collected. Hope’s Community Closet donated 50 jackets to the school. Worley said this interaction has paved the way for staff to provide another resource to homeless students on campus who are in need.

“I learned that people are eager to give back to the community, they just don’t know how,” said Worley. I’m happy that we were able to give them a way to make a difference to the children in their community. She mentioned that this experience has been eye-opening for her. “We started spreading the word of our collection the week after the inauguration, when tensions were running high. It was wonderful see the amount of community outpour that we received. I learned that things don’t matter when we are all united for a good cause.”

Rancho Viejo has received so many jackets from their drive that they are giving some of them to Diamond Valley Middle School. A staff member from Diamond Valley reached out to Worley and said she noticed some students on her campus that were in need as well.

Worley encourages the community to reach out to their school’s staff if they have students in need of weather-appropriate clothing. She also said, “If you have a good idea, run with it and seize the opportunity. You’ll be surprised by the response you receive!”