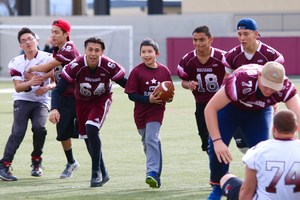 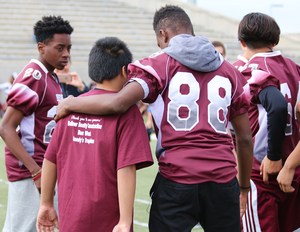 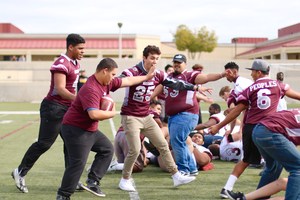 Students with moderate to severe disabilities participated in the annual Super Kids Bowl.

Hemet Unified School District (HUSD) had its annual Super Kids Bowl on Friday morning February 3, 2017. Students with moderate to severe disabilities participated in a safe version of football with the West Valley High School Varsity football team. Matt Kraemer, Principal of Idyllwild School, started this event 13 years ago, and it continues to inspire everyone involved.

Every year students with moderate to severe disabilities will play a game of football with the support of a local HUSD football team. This year West Valley hosted this amazing event. The Mustangs offensive players assisted 6th-12th grade students in scoring a touchdown against the defense. While hesitant at first, students couldn’t help but enjoy themselves as the Mustangs provided them with patience and encouragement to reach the end zone! Students were seen spiking the ball, cheering along with the crowd, and high-fiving the West Valley cheerleaders on the sideline. Each time a student crossed into the end zone, the band played enthusiastically to celebrate the touchdown.

“I was proud to see how dedicated my players were to making this a special event for the students involved,” said West Valley’s Football Coach Matthew Willard. He explained that while the event is for the moderate to severely handicapped students within the district, he was able to see the impact it had on his football players. He said the most memorable part of the event were the moments in between the snap of the ball and the touchdown, where the student relied heavily on the football players to get to the end zone. “The compassion that continued to be displayed throughout the event was wonderful to see.”

Matt Kraemer had nothing but gratitude for everyone that supported this event: Associated Student Body (ASB) students from Idyllwild School helped their Principal throughout the event; West Valley’s ASB Coordinator Tom Windmiller, who helped Mr. Kraemer announce the football plays throughout the event; Football Coach Matthew Willard and his football players for the compassion they showed; Cheer Coach Skyla Stuck and her cheerleaders for keeping the excitement going on the sidelines; Emily Hulstrom, a Valle Vista teacher, Debbi Kraemer, HR Technician, and President of HUSD’s Governing Board, Vic Scavarda, retired district Psychologist Glenn Schumacher, and Idyllwild Rotary’s John Graham and Tom Kluzak for taking pictures; Hemet Unified’s Print Shop for the T-shirts with the Super Kids Bowl logo; and the Transportation Department for transporting the students to the event.

The weather was beautiful, the field was great, and it all set the stage for yet another wonderful Super Kids Bowl! Thank you to everyone involved this year.