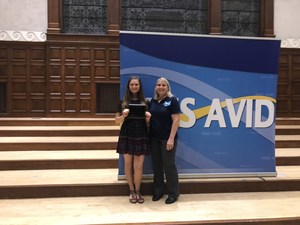 A 7th grade student from Hemet Unified was named a regional winner in the 18th annual Advancement Via Individual Determination (AVID) Write-Off contest. She was honored at the March 21st ceremony at the University of Redlands.

Thomasyna Towery, the seventh grade student at Rancho Viejo Middle School, competed last year in the competition, but was not named a regional winner. She said she was thrilled to have progressed from last year. This year, students were asked to write an essay based on their opinion on whether college athletes should be paid. Students were given 10 minutes to read the questions and brainstorm how they would write their essay, 30 minutes to write the essay, and five minutes to edit. The timed writing contest is modeled after the University of California’s Analytical Writing Exam.

Thomasyna said she has always enjoyed writing and plans on competing in the contest next year. She also loves to read and thinks that it helps make her writing stronger. She said both give her an escape if she is having a bad day. Despite her love of writing, Thomasyna is interested in entering the medical field. She hopes to attend the University of California, San Diego, and study to become a pediatrician.

Congratulations Thomasyna Towery on becoming a regional winner for the AVID Write-Off Contest!