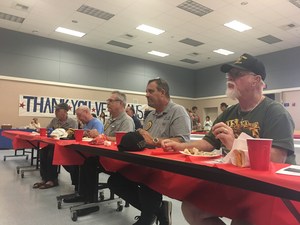 Staff and students at Rancho Viejo held a BBQ for local Veterans to honor and thank them for their service.

Over the summer, Principal Jonathan Workman and ASB Director Stacy Ciampa discussed creating an event to honor those that have served our great country. This idea snowballed into a heart-felt event that had an impact on the entire campus.

Staff invited local Veterans to Rancho Viejo Middle School for a BBQ to honor them and the sacrifices they have made. Staff reached out to the local American Legion, Veterans of Foreign Wars (VFW), Elks Lodge, and asked students to invite the Veterans in their families to the BBQ. Staff bought and cooked hot dogs and hamburgers; they also provided drinks, desserts, and all of the fixings. ASB students helped decorate the MPR, served the Veterans food, and picked up their trash for them. In addition, Veterans were in for a heart-warming surprise, provided by the students at Rancho Viejo.

After the BBQ, Bill Harrison, a Navy Veteran, went to the Yes I Can class and the Peer Leaders Uniting Students (PLUS) class to speak about his experience while serving. He described how his ship sank and he was stranded at sea for six days. Staff said that students were very quiet and attentive throughout his entire speech, and that they could tell what an impact it made on the students.

As the event came to a close, Mr. Matthew Casey, President of Hemet’s American Legion said, “Today was a day to thank us for our service. But today we are leaving thankful for having such generous and thoughtful students who have taken the time to honor us.”

Thank you Rancho Viejo staff and students for creating an event to honor those that have served our country!